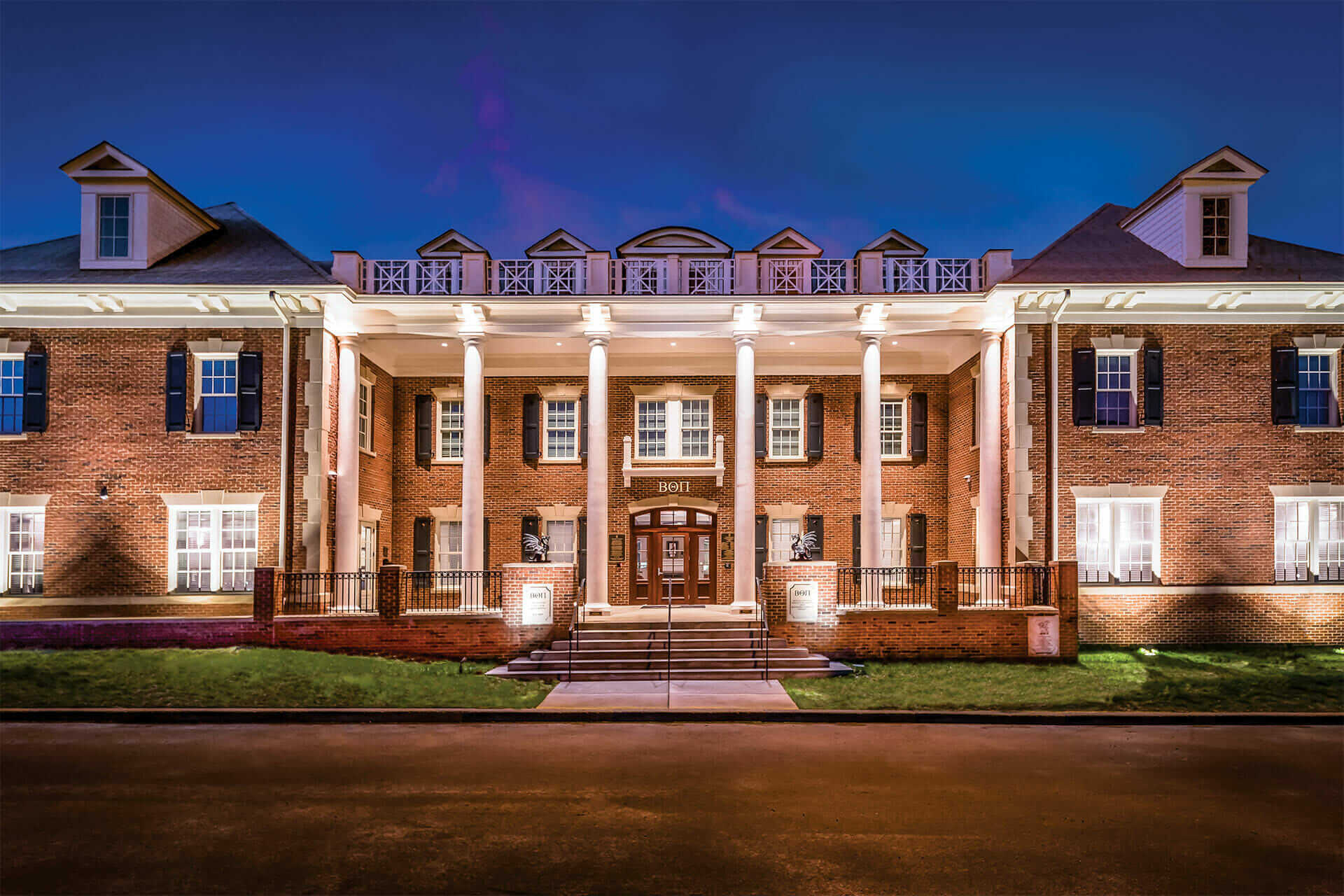 Just beyond a pair of handsome bronze dragons and six stately pillars, a familiar poem hangs outside the entry door of the brand new Beta house at the University of Kentucky. Miss Will Allen Dromgoole’s “The Bridge Builder” is well known to brothers far and wide, but its message of selflessness and sacrifice for future generations rings particularly true here in Lexington.

Beta Theta Pi’s first attempt to establish an outpost at the Bluegrass State’s flagship institution was, in many ways, a success.

With help from their designated “sponsoring chapter” – Delta Xi at Eastern Kentucky – Epsilon Omicron progressed at UK for several years beginning in 1987. But, without long-term housing options, and lacking a large, mature alumni base to draw upon for leadership and support, the chapter membership dwindled and closed unceremoniously after a decade.

Fast forward to the General Fraternity-led recolonization in 2010 and a reinvigorated Epsilon Omicron stood ready to fight for a different outcome. Believing a chapter house would enrich their brotherhood, the Refounding Fathers matched their words with action, beginning to save almost immediately – $3,000 in their first year and $20,000 by 2012.

Where it’s common for house corporations to fund a chapter’s needs, at Kentucky it was the other way around. That $20,000 was presented as the initial deposit into the newly formed house corporation’s checking account – a contribution critical to laying the foundation for eventual architectural designs and initial permits, and boosting the project until the financing package was closed with the bank.

A Place to Call Home

With the university purchasing and razing a string of student rentals on a remaining city-owned street in the heart of campus, staunch fraternity advocate and University President Eli Capilouto, Zeta Beta Tau, designated the land for an expansion of UK’s Greek Park. Resulting in seven new parcels, the young house corporation competed with 13 other organizations and made its pitch to the campus committee relying on a mix of General Fraternity initiatives and chapter accomplishments. That the chapter was recolonized under the Men of Principle initiative, consistently ranked first academically among UK’s 23 fraternities, was the largest on campus with some 150 members and had won nearly 20 national awards worked in the chapter’s favor. Epsilon Omicron received the prime corner lot next to Delta Gamma and the new Kappa Alpha Theta house.

By 2015, and with plans well underway thanks to the chapter’s $150,000 pledge and instrumental support of the Beta Foundation and General Fraternity, a $750,000 fundraising effort was launched. Over the next three years, the “For Now, Forever” campaign saw another 66 alumni, 18 parents and undergraduate donors help make the chapter’s dream a reality – including four Eastern Kentucky alumni who spearheaded establishment of the house corporation to begin with and continued the chapters’ storied partnership with a collective $75,000 in donations.

At a cost of $4.8 million, which was managed by dedicated House Corporation Treasurer Josh Jehn, Eastern Kentucky ’93, the final result is a 22,000-square foot, Georgian Revival-style home that sleeps 40 and boasts the house corporation’s explicit design priorities: safety, academics and brotherhood, all woven together in a home that exudes warmth and character.

With tons of IT horsepower, elevated beds and semi-private bathrooms, the house matches modern expectations of students and parents.

Beyond the living quarters, members and guests enjoy access to the dramatic porch, entry Great Hall, formal living rooms, side yards for recreation, library and a large media room.

To promote brotherhood, a stately dining room was created to seat 80 and a meal plan and weekly formal chapter dinners were instituted. A sense of having the best fraternity meal plan on campus has already taken hold.
Of course, protecting this investment requires security via emergency systems tied in with UK, exterior surveillance cameras and the mens’ devoted full-time housemother, Mimi.

To that end, “Milk and Cookies Thursday” has become a chapter favorite, as the men are routinely showered with special treats and gestures that only a house mom can provide.

With plans to expand the basement to include a second study hall, five private conference rooms and a museum, and construct 17 sleeping spaces on the third floor, as needed, there’s more to come from this instant Beta gem.

Success From the Ground Up

Less than two years ago, 440 Pennsylvania Avenue in Lexington was merely dirt. Today, it’s home to the Beta Theta Pi House at Patterson Place. It’s one of the finest fraternity houses on campus for an equally fine chapter.
Epsilon Omicron, too, came from little, but now thrives as a four-time Knox Award winning chapter in just the last five years, a 2018 NIC Award of Distinction recipient and the top academic chapter at UK eight years running. This February, the chapter also received the IFC’s 2019 Dean’s Cup, recognizing it as “Chapter of the Year.”

Like its house, this chapter’s accolades didn’t come by chance, but because of the men’s forward-thinking attitude and humble desire to ascribe to the words on the front door – by being bridge builders.

A Message to the Trustees